Sauroposeidon is the Tallest Dinosaur Known

Sauroposeidon was the last of the giant sauropods in the early cretaceous period. Thanks to its long neck, this herbivore has won the title of “tallest dinosaur known to date”. The reconstruction process, based on the discovery of only four vertebrae, is a great display of the ingenuity with which scientists have been able to bring to life these animals which roamed the earth millions of years ago.

Sauroposeidon was a Quadrupedal Saurischian Dinosaur

It is no wonder that the name of this dinosaur comes from the mighty Greek god Poseidon, who was not only the king of the sea, but also had the power to cause earthquakes. When the massive Sauroposeidon walked, the earth shook!

Its complete scientific name is Sauroposeidon proteles, a greek word meaning “perfect before the end”, as it is believed that Sauroposeidon was the last and most specialized giant sauropod to live in North America.

There is little fossil evidence from the early Cretaceous period, but scientists have managed to reconstruct Sauroposeidon from four neck vertebrae they found in southeast Oklahoma. A brachiosaurid, sauroposeidon was quadrupedal -with its front legs longer than its hind legs-, a hervibore, and had a very long neck of up to 12 meters (39 ft.) -the longest of any known vertebrate. Its body structure has been compared to that of a giraffe.

As there are so little fossil remains of Sauroposeidon, a great deal of what we see in reconstruction of this herbivore comes from comparisons with other brachiosaurids, such as the Giraffatitan brancai from the late Jurassic period. The vertebrae which were the base of the reconstruction, show that Sauroposeidon’s bones were very thin and honeycombed, ie. filled with small air cells, making them both light and strong at the same time. Thanks to this feature, it is estimated that it could lift its long neck up to 17 meters (56 ft.) off the ground. However, it’s unknown whether it kept its neck elongated at all times, since this would have put too much stress on its heart, or whether it kept it parallel to the ground most of the time.

Its long neck makes Sauroposeidon the tallest dinosaur known to date, although not the largest or heaviest, as that honour belongs to the Argentinosaurus. Its shoulder height was of about 7 meters (23 ft.) and the total length of its body between 28 and 34 meters (92 to 111 ft.).

It is estimated that Sauroposeidon’s weight was about 50 to 60 metric tons (55–66 short tons), although this estimate is not precise as only the bones of its neck are known, and they could have differed from those in the rest of its body.

Sauroposeidon was an herbivore, and its long neck would have allowed it to eat leaves from the tops of trees, probably conifers, magnolias, palms and sycamores. It would have needed about one ton of plant material per day to remain healthy.  If, as suggested by some, Sauroposeidon had not been able to keep his neck elongated, it’s most likely that it would have eaten low lying vegetation.

As the body of Sauroposeidon has not been reconstructed due to a lack of fossil evidence (bones from its body) there is no information available as to how it moved. However, other brachiosaurids of similar shape -very large animals with short legs- are thought to be among the slowest of dinosaurs, so it’s likely that this characterization could apply to Sauroposeidon as well.

It is unlikely that this herbivore would have had any predators, as no other animal could have taken on a full grown Sauroposeidon. Juveniles, however, could have been preyed on by the Acrocanthosaurus atokensis, a large bipedal theropod which lived in the same area and preyed on large sauropods and ornithopods, and the much smaller and agile coelurosaur Deinonychus antirrhopus. The Deinonychus was only about a tenth of the size of an adult Sauroposeidon!

The History of Discovering Sauroposeidon

Sauroposeidon lived about 110 million years ago in the Aptian to Albian stages of the early Cretaceous. It lived in a swampy environment, at a river delta on the shores of the Gulf of Mexico, which at the time extended through what is today Oklahoma.

When Sauroposeidon’s four vertebrae were discovered in a claystone outcrop in Oklahoma, near the Texan border, in 1994, the team at the Oklahoma Museum of Natural History thought them too large to be dinosaur bones and assumed they were fossilized tree trunks. These bones were stored until 1999, when a graduate student, Matt Wedel, analyzed them as part of a project. Once they realized they had found this massive animal, in an era when sauropods were normally subcompact, Sauroposeidon jumped to fame as “the biggest dinosaur ever found”, though this was incorrect, as the Argentinosaurus had already been discovered and documented by then.

These four cervical vertebrae, the longest of which measures 1.4 meters are the only remains of Sauroposeidon found so far. Therefore, very little is known about this dinosaur, and much of the information available is based on comparisons with better known brachiosaurids.

Professor Robert Cifelli of the University of Oklahoma, one of the discoverers of Sauroposeidon, has stated that “[Sauroposeion] is an old design. By this time, that body plan is just not working anymore. By the time this guy comes along, they are dying out in North America. He is pretty much the last of his kind.” The discovery of Sauroposeidon has provided one more step to the understanding of Sauropod evolution and extinction in the Early Cretaceous of North America, a task which has proven quite difficult due to the lack of fossil material from that era. 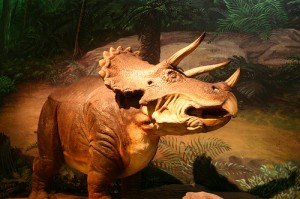 Make Your Own Dinosaur Mask It’s make a dino Monday and today I’m sharing a video on making dinosaur masks. Okay, so many of my readers are a little too old to be walking around in dinosaur masks but I happen to know that quite a few of you have kids and what better way […]