You are here: Home / Carnivores / Dilophosaurus

Dilophosaurus is a Commonly Misrepresented Dinosaur

Dilophosaurus is one of the most misunderstood and misrepresented dinosaur species to have lived. As one of the earliest Jurassic theropods this dinosaur has suffered from poor fossil representation and imaginative Hollywood depictions. Below we will take a look at just what we do know about this bipedal carnivore. 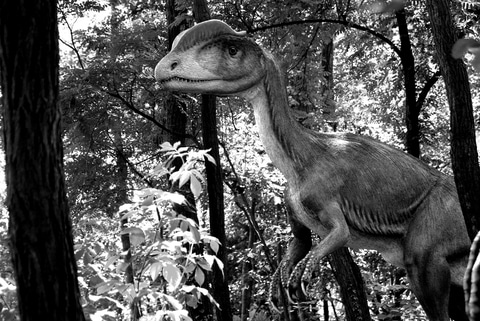 Dilophosaurus was a Saurischian Theropod

As a Saurischian dinosaur species, Dilophosaurus had lizard structured hips. All theropods are classified as Saurischia and have a three pronged pelvic structure. The pubis of the Saurischian dinosaur is forward pointing and represents the hip structure of modern day lizard species. As a member of the suborder Theropoda, Dilophosaurus was a carnivore and is believed to be related to modern day birds! Some reconstructions of this carnivorous dinosaur even include feathers that bring this species closer to early bird species.

Dilophosaurus is said to have measured in at approximately 8 feet tall and 20 feet long and weighed around half a ton. The body of this long dinosaur would have been balanced by the long rigid tail which served as a counterbalance as well as a means to turn quickly without losing balance. The skull of Dilophosaurus was filled with long but thin teeth that got larger toward the base. Much like common day crocodiles, this carnivore skull featured a notch behind the first row of teeth. This notch results from the connection between the maxillary bones of the skull being weak and it is hypothesized that this weakness likely resulted in Dilophosaurus being a scavenger rather than a hunter. With a weak front jaw connection any attempt to bring down larger prey items would have led to damage to the jaw or teeth or escape of the prey. It is possible however, that this theropod fed on smaller reptiles in addition to larger carcasses.

The arms of Dilophosaurus were small much like other Theropods and each arm had a three fingered “hand.” While the forelimbs of this Jurassic period dinosaur were particularly small and weak, the hind legs were quite the opposite. The majority of Dilophosaurus’ strength came from its rear limbs. Currently there is no evidence to speak to the fact that Dilophosaurus was covered in birdlike feathers and as a result most depictions of this theropod show scaled reptilian skin. It is possible that this dinosaur had a thin feathered covering as suggested by one fossilized specimen that presents possible feather imprints.  While there is some question over the presence of feathers, there is certainly no question over the presence of cranial crests. To date no paleontologists have been able to determine whether sexual dimorphism existed within the species; however, if it did it was likely based in cranial crest appearance.

The Head Gear of Dilophosaurus

The cranial crests of the Dilophosaurus sat atop the skull and were semicircular in appearance. Each specimen had two of these crests which sat parallel to each other along the length of the skull but did not stand as tall as crests of other crested species. Each crest contained a thin strip of bone which indicates that these crests served no part of physical displays of dominance as they did with Pachycephalosaurs. There are three main theories as to the purpose of Dilophosaurus’ cranial crests: sexual dimorphism, individual identification and sexual appeal.

Misrepresentation of Dilophosaurus in Jurassic Park

Most individuals recognize Dilophosaurus as a species of frilled dinosaur that has the ability to spit corrosive poison in to the face of its enemies. While this is certainly the depiction that this species received in Hollywood’s Jurassic Park, there is no evidence that Dilophosaurus ever had a frill or the ability to “spit poison.” In addition to these two creative additions, Dilophosaurus was also considerably reduced in size from 8 feet tall to 3 feet tall and from 20 feet long to 5 feet long. According to Steven Spielberg the frill and poison features were added as creative license and the size reduction was made to help non-dinosaur lovers identify the difference between Dilophosaurus and the Velociraptor. These changes may have made for a good Hollywood movie, but unfortunately it has caused a significant amount of confusion among the non-scientific community as to what this specimen really looked like.

What Did Dilophosaurus Eat?

Despite not being able to spit “poison,” Dilophosaurus rarely went hungry, at least not in comparison to other larger carnivores that required much more substance to sustain them. There is some dispute as to what this carnivore actually ate due to the jaw structure. It is possible that this theropod fed on any meat it was able to scavenge as well as fed on smaller lizards and small carnivores that would not have required much jaw power to capture and kill.

How Did Dilophosaurus Move?

Dilophosaurus was a bipedal dinosaur and due to the structure of its large strong hind legs it was quite a fast runner. This dinosaur could run so fast in fact that some of the fossilized footprints that have been found to date only feature claw marks since the whole foot did not touch the ground! The stride length of this Jurassic carnivore was just around seven feet – that’s seven feet between footprints! Current projections state that this dinosaur could run as fast as 30 mph. From preserved footprints of Dilophosaurus, researchers believe that this carnivore was a small pack mover much like the Velociraptor and they may have hunted in packs by implementing ambush hunting as well.

To date paleontologists believe that Dilophosaurus was the most dominant predator within its ecosystem. Dilophosaurus may have lived with other Theropods later in its evolution, but during the early Jurassic period it was one of the largest Theropod species around.

The Discovery of Dilophosaurus

Where Did Dilophosaurus Live?

Approximately 193 million years ago Dilophosaurus lived on the Western half of the bifurcated (by sea) North American continent in what is today Arizona and Utah. Some believe that this theropod also lived in China after a possible specimen was recovered in the Yunnan Province in 1987.

A third specimen recovery leads to questions as to whether this dinosaur also thrived in what is now the Yunnan Province of China. This specimen shows significant structural differences in the skull formation and is believed by some to more closely represent Cryolophosaurus – an Antarctic theropod. This potential Dilophosaurus specimen was named Dilophosaurus sinensis in 1993 by Shaojin Hu.

The Importance of Understanding the Dilophosaurus

specimens that have been recovered to date, there are many things this species can reveal to paleontologists. As one of the earliest and largest Theropods to appear in the early Jurassic period, this member of the Dilophosauridae family provides a marker by which researchers can gauge the evolution of theropods through until their eventual extinction at the end of the Cretaceous period. Dilophosaurus also has the potential to provide valuable clues as to the evolution of birds from dinosaurs. Hopefully as new specimens of Dilophosaurus are recovered we can gain new knowledge to help fill in the gaps between prehistoric life and modern day aves.