In the Liujiaxia Dinosaur National Geopark in the Gansu Province of China, there are 71 two-toed imprints left behind by the feet of an Early Cretaceous dinosaur. Two-toed tracks have been found at numerous sites all over the world, but most of them are in China. This set of footprints was so unique, though, they were given their own name. When scientists come across a unique, consistent set of tracks, they label them in order to keep track of what kinds of dinosaurs left the prints. Then, they work backward in an attempt to figure out which species left the tracks behind millions of years ago.

In the case of the Gansu Province footprints, researchers knew the culprit had to be a Deinonychosaur because this group of sickle-clawed dinosaurs walked on two toes while the large, curved claw was held off the ground. Troodontids and Dromaesaurids were the only Deinonychosaurs that inhabited China during the Early Cretaceous so scientists narrowed their search to these two genera. Since these special tracks were laid down by a two-toed theropod, they were easier to identify. Most theropod dinosaurs supported their weight and maintained balance with three toes touching the ground.

With these two genera in mind, scientists studied foot anatomy to eliminate one of the dinosaurs and reach a conclusion. They determined that the toe lengths were slightly different in these two dinosaurs so they used this information as a determining factor to name the correct dinosaur. After comparing the tracks to the feet of these dinosaurs, scientists pegged the tracks to a species of dromaeosaurid. The research doesn’t stop here though.

Native Americans were fascinated by dinosaur tracks despite not having an idea of what creature left them. We know this because of petroglyphs that give mention to the footprints of massive animals. Human fascination didn’t turn into scientific study until around the 1980’s though. When the study of trace fossils, such as dinosaur tracks, became popular, a new field of science was spawned. This science is known as ichnology and it covers the study of any trace fossil that records biological activity. This includes tracking dinosaurs through footprints, burrows, feeding marks, and any other signs of life that could have been left behind such as marks left by the dragging of a tail or belly.

What We Can Learn From Tracking Dinosaurs

Tracking dinosaurs through their tracks can give a wealth of information to scientists—even in the absence of skeletal remains. The most obvious information that is gained through the study of tracks is foot anatomy. Foot anatomy was an important part of figuring out which dinosaur left the two-toed tracks in the Liujiaxia Dinosaur National Geopark. Multiple tracks laid down by the same species at the same time are a good indication that the species traveled in herds. Scientists can make educated guesses on the size of the dinosaur, its gait and speed, and whether it traveled on two legs or four. Some behaviors can be figured out from footprints alone. For instance, trackways at the Liujiaxia park show that some dinosaurs turned while walking. This isn’t ground-breaking evidence, but petty pieces of information can be linked together to make astounding discoveries that can change paleontologists’ view on the dinosaur and lead to new research. Studying footprint fossils can also tell scientists about the environment in which the dinosaur roamed. If fossil tracks can be tied to a specific dinosaur, researchers can study the rock around the tracks to pinpoint the time period that the dinosaur lived in. Researchers are also able to figure out the ecosystem that the dinosaur was walking through at the time—even though it might have been over 100 million years ago. Tracking dinosaurs through footprints just shows that there is more to dinosaur research than the bones they left behind. 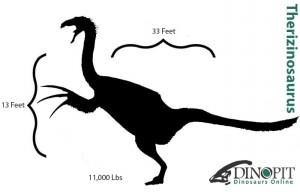 I’m willing to bet that you never knew that Velociraptors love cupcakes! If you are a regular DinoPit reader then by now you already know my feelings on Velociraptors. If you are new here then you should know this: the very thought of a velociraptor tapping it’s talon as it seeks out it’s prey is, […]