You are here: Home / Archives for Ceratopsidae

Torosaurus – A Massive-Skulled Ceratopsian, Dwarfing The Triceratops Torosaurus, pronounced TOR-uh-SAWR-us, (protuberance lizard) was an immense chasmosaurine ceratopsid (tribe Triceratopsini) dinosaur, having had one of the largest skulls of any known land animal, measuring in at a staggering nine-feet long. Chasmosaurinae is a subfamily of Ceratopsid … END_OF_DOCUMENT_TOKEN_TO_BE_REPLACED

Eoceratops was a Cretaceous Ceratopsid Eoceratops was an herbivorous dinosaur that lived in the early Cretaceous Period, from 140 to 100 million years ago. Eoceratops was a member of the family Ceratopsidae, which includes other four-legged, horned dinosaurs. The first fossil was unearthed in 1898, but the fossil wasn’t recognized as a unique species until 16 years … END_OF_DOCUMENT_TOKEN_TO_BE_REPLACED 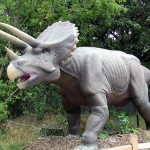 Triceratops was a Late Ceratopsid Dinosaur A ceratopsid (horned) dinosaur, Triceratops lived during the late Cretaceous Period about 65 million years ago, in what is now known as North America. Meaning “three-horned face” when translated from the Greek language, Triceratops (pronounced Try-serra-tops) was one of the last non-avian dinosaurs to live before the … END_OF_DOCUMENT_TOKEN_TO_BE_REPLACED

Styracosaurus Was a Cretaceous Period Ceratopsian Syracosaurus, a member of the Centrosaurinae family, lived in the woodlands of North America in the late Cretaceous Period about 75 million years ago. This herbivore was amongst one of the last major dinosaurs to evolve before the end of the dinosaurs in the Cretaceous-Tertiary extinction. Named Styracosaurus (pronounced … END_OF_DOCUMENT_TOKEN_TO_BE_REPLACED